This Passion Play is not being performed in 2017. Please visit again for further information.

A crowd of more than 600 people from Clonard and surrounding areas turned out to witness Clonard Church’s very first Passion Play on Palm Sunday in 2013. 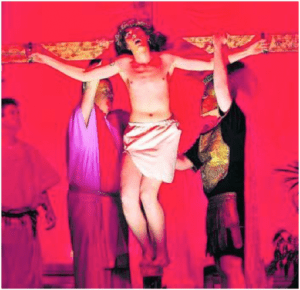 A beautiful stage, depicting ancient Jerusalem, was created and lit inside the church, setting the scene for what would be a wonderful performance.

The play was put on by the House of Brigid, a lay international community of graduates dedicated to service within the Catholic Church. Emily Puscas from Connecticut in the US was the playwright and director, with House of Brigid members Molly Mattingly and Nicole Storey acting as musical directors and Nicholas Galasso as stage manager.

The cast of about 40 drew people in from Clonard as well as Rowe Street and Bride Street churches, and was a magnificent mergence of cultures, which included the talents of a mother and son from the Czech Republic, a Sri Lankan girl, two young girls from Poland, a German student living in Wexford, the House of Brigid community from the US, and a number of Wexford natives ranging in ages from six to 80.

The cast had been rehearsing since mid-January for the play, which included stories from Jesus’ lifetime as well as his passion and death, and was a beautiful celebration which was enjoyed by all in attendance on the night.

The play drew a fantastic response from the community and it is hoped that it is the first of many Clonard Passion play productions to come.