This Passion Play is not being performed in 2017. Please visit again for further information. 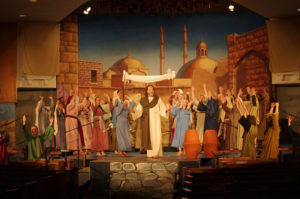 The story of the Passion of Christ will be told through the medieval mystery plays.Originally these plays were performed by guilds of craftsmen or artisans, {Latin misterium = occupation hence title of the plays}, at locations in their town. Each guild would be responsible for a particular and appropriate scene; the guild of bakers staging the Last Supper would be an example. The best known mystery plays are the Chester and the Wakefield cycles.

This is a co-production between ChristChurch and Colchester Theatre Group. The script has been devised by Rod Green based on the medieval mystery plays. It is directed by Sara Green and Anne Tomkinson who is a member of Lion Walk URC.The cast of some twenty five actors is split between the Theatre Group and the Churches.