This passion play is no longer being performed. If you would like to start a new play in your town or city, please contact the Passion Trust for help, advice and funding. 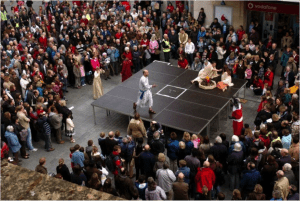 Good Friday Passion play on in Exeter took place in 2014. Read more below:

A special service will take place in Exeter Cathedral at 10am – enabling people to worship and hear a Christian message – before the Biblical scenes unfold outside.
The WoW will illustrate the “complete Passion cycle” for the first time in its seven-year history – from Jesus’ triumphant entry into Jerusalem until his rise from the grave.

Adrian Jackson, 39, who directed the play and will take-on the main role of Jesus, said: “It’s a story for everyone, and what better time to tell that story!

“It’s not pleasant or pretty, but it’s what happened and this year we wanted to tell the whole story.

“The world is not the way God wanted it to be. But he sorted it out through the cross where Jesus took the horror and the pain on his back.

“Jesus achieved the ultimate victory by triumphing over death, giving us hope for the future.”

At the end of the cathedral service, the character of Jesus will leave the building on a donkey.

He will lead a smaller procession up the High Street to Bedford Square before the final action takes place on the Cathedral Green.

Afterwards there will be a short reflection, and hot cross buns will be distributed to the crowd.

Members of around 30 churches in the city worked together to host the play that has a cast of around 25 people.

In previous years, more than 1,000 people have followed a group of actors as they perform the drama.

Mr Jackson, 39, of Pinhoe Road Baptist Church, said he was “very excited” about reprising the character of Jesus for the third year running.

“The play usually very well attended and received by people,” he said
“This year we’ve got our biggest-ever cast. It’s been difficult to be in the play and to have an outside eye. But after many months, it’s finally coming together and we’re all looking forward to it.”

Christians believe that God sent his son Jesus to die and rise again for the forgiveness of sin and promise of eternal life.