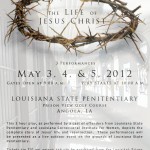 Read testimonies from the 2013 performance of ‘The Life of Jesus Christ’ at the following link: Testimonies October 2013.

See also behind the scenes of ‘The Life of Jesus Christ’.

‘The Life of Jesus Christ’ is a two hour play performed by a cast of offenders from Louisiana State Penitentiary and Louisiana Correctional Institute for Women. It depicts the complete story of Jesus’ life and resurrection. It is now being made into a feature documentary called CAST THE FIRST STONE.

In early 2012, 75 actors and one theater director, all inmates at Angola Prison and Louisiana Correctional Institution for Women, came together to put on the performance of their lives. The cast and crew, made up of murderers and robbers, thieves and prostitutes, and no doubt a few wrongly convicted, prepared two yeas to put on a public performance of the life of Jesus Christ in the largest prison production of a Passion Play ever. CAST THE FIRST STONE is a feature documentary about the most powerful and popular story in history. In a place with little hope of freedom, where 95% of the men who enter the gates perish, the story of a man who sacrifices his life to save the wretched of the Earth, resonates deeply.