What is a Passion Play?

Homepage What is a Passion Play?

What is a Passion Play?

A Passion Play dramatises the events of the last week of Jesus’ life, depicting the events that led up to his crucifixion. Many Passion Plays today also include a dramatic portrayal  of Jesus’ life, including his teachings and miracles, and his  resurrection to show the context in which his death took place.

Passion Plays use theatre to bring the words of the Gospel to life in new, often vivid and startling, ways. They show how the message of second chances, forgiveness and new opportunities has the potential to speak life and hope into communities struggling with poverty, crime, addiction or hopelessness and boredom.

A Passion Play is a dramatic portrayal of what has been called the greatest story ever told. It is the real story of Easter and it has all the elements of stories that are compelling and confronting: treachery, betrayal, injustice, sacrifice, redemption and a startling ending. As Passion Plays dramatize the story of Easter, they allow it to speak again to new audiences in new contexts.

Why are they called Passion Plays?

The word ‘Passion’ refers to the fervent love Jesus had for the people he came to save. The Bible tells us that ‘God so loved the world that he sent his only son so that no one would perish but all would come to eternal life’. Such fervent love endures all suffering and we know that Jesus ‘for the joy set before him, endured the cross, despising its shame’.

The word ‘Passion’ also refers to the intense suffering in Jesus’ life from the time of his betrayal and agony in the Garden of Gethsemane to his trial, torture and death.

Finally, the word ‘Passion’ can also encompass our response to God’s love and Jesus’ willingness to die for us. Telling the story of Jesus’ life, death and resurrection reminds us of how God entered our world of suffering and paved the way to new hope and a second chance. Jesus came to die on the cross and h His cruel death and disgrace was in exchange for our new life. His suffering – his passion – is the measure of his love for us.

Why watch a Passion Play?

Take part in a historic and time-honoured tradition that has taken place over hundreds of years across the UK.

Watching a Passion Play can be very inspiring:

Other benefits of Passion Plays:

Passion Plays bring the story of Jesus Christ’s life, death and resurrection to life in free performance in towns and cities across the UK. The Gospel story of second chances, forgiveness and reconciliation has the potential to inspire life and hope.

Do you want to see a new Passion Play in your town or city?

Putting on a Passion Play in your town or city is not as hard as you think. If you have been inspired to have a free performance for your community, visit the Passion Trust site to find out how we can help you produce one or contact us directly.

Visit the Passion Trust site to find out more

Do you want to join your local Passion Play?

There are Passion Plays emerging all over the UK. You can watch them free of charge or volunteer to help as part of the cast or crew.

Find the contact details of a play near you

Do you need help with funding, support, or resources for your Passion Play?

The Passion Trust exists to support you as you produce and perform passion plays in your own towns and cities. You can access these resources, free of charge, along with other assistance and help at the Passion Trust website.

Do you want to make a donation in support of Passion Plays?

The Passion Trust gives 100% of donations to supporting Passion Plays in the UK.

Your donation will be of vital support to ever-growing numbers of producers, directors, actors and large volunteer cast and crew. Help us fulfil our vision to see a Passion Play in every town and city across the UK.

Make a donation to the Passion Trust

Local communities are greatly impacted by the free performances of Passion Plays not only in the actual performance but also in the broader process of rehearsing and producing it. As Van Eugene (2001) puts it:

Community theatre yields grass roots performances in which the participating community residents themselves perform and during the creative process of which they have substantial input. (p.2)

They promote social cohesion and community spirit and exemplify many aspects of what Ann Jellicoe (1987) describes as ‘community drama’ and work to build community and strengthen relationships between people:

This opportunity for friendly cooperation over a long period stimulates and help to unite a community. It will give them something to celebrate together and be proud of. Communities need community events to continually refresh them. Community plays can’t draw everyone in and can’t change everyone, but they are one of the most successful and all-embracing community events. (p.46)

Volunteers from all sections of society bring a range of skills, experience or material assistance, whether donations of wood for the cross, willingness to stitch costumes for the performance or help with publicity for the event.

The cast itself, apart from the actor playing Christ who is often the only professional actor, are all volunteers; some are members of amateur dramatic groups, other volunteers may include young professionals, ex-offenders, university students, single mothers and at-risk youth. Some participants may well have professional theatre training even though they are not employed within the theatre industry.

Easter plays and religious drama have a long and popular history in the UK.

Today’s Passion Plays are descendants of the Quem Quaeritis Easter liturgy from the 10th and 11th centuries. They also look back to the medieval Mystery Plays which involved the whole community in performances of the Bible story during the feast of Corpus Christi.

Medieval Mystery Plays were performed on pageant wagons at different sites around the city centre. In medieval York, for example, the Mystery Plays dramatised the whole Bible from the Fall of Man to the Last Judgement. Different guilds performed different parts of the cycle: the Flood was performed by the Fishers and Mariners, the Slaughter of the Innocents by the Girdlers and Nailers and the Resurrection by the Carpenters.

Mystery Plays were so popular that royal and noble visitors had special performances put on for them. The guilds of Coventry performed Mystery Plays for Margaret of Anjou in 1457 (who was reportedly disappointed that she missed the Draper’s Doomsday play due to lack of daylight), as well as for Richard III in 1485 and for Henry VIII in 1493.

You can visit our YouTube Channel for full performances, documentaries, audio versions and trailers.

Jesus defies description in so many ways. There is no simple response to who he is or what he says about himself. He lived most of his life in an obscure village in first century Palestine and worked as a carpenter until he was thirty. He was also a man who spent three years of his life publicly teaching people about the kingdom of God and attracting passionate attention that has continued for over two thousand years.

He described himself as God in unmistakable claims that were both controversial and undeniable. Controversial because such claims were in violation of the Jewish law. Undeniable because they were accompanied by spectacular miracles. Water was turned to wine, bread was multiplied to feed multitudes of starving people, blind men received sight, crippled beggars walked again, distraught women saw their children raised from the dead, tormented people received peace and sinners were forgiven and released from guilt and despair.

Because of these claims, Jesus was suspected and hated by many people who saw this display of the kingdom of God as a threat to the existing political and religious regimes. He was betrayed to his enemies by one of his companions and although innocent, he was condemned to death by both Roman governors and Jewish religious leaders.

When he was dead, he was placed in a borrowed grave and his friends and followers fled in fear of a similar fate. But that wasn’t the end of the story. Passion Plays give an account of the defeat of death, the chance of new life and the hope of resurrection. It is a story that is still being told today.

Who are the other main characters?

Peter was a fisherman who left his trade to become a disciple of Jesus. Although he swore he would never abandon his friend, Jesus was taken into custody and three times Peter denied that he even knew him. But after meeting with the risen Jesus, Peter was never the same again. He was also killed by people who did not understand the kingdom of God. He was martyred by upside-down crucifixion in 64AD, saying he wasn’t worthy of dying in the same way as Jesus.

Who is Pontius Pilate?

Pilate was the Roman governor of Judea at the time Jesus was brought to trial. Although he did not see Jesus as a political threat, he was swayed by the crowds that had gathered to demand that Jesus be put to death. He is remembered in art and literature as the man who refused to save an innocent man yet attempted to wash his hands of his guilt.

Mary was the young mother of Jesus who lived to see her son crucified before her eyes. Two moments in her life are often immortalised in art and music. We see her as the devoted mother of a child born because of an angel’s promise. We also see her as a weeping mother holding the broken body of her crucified son. One other moment is dramatised in Passion Plays: her realisation that Jesus did not remain in the grave, but rose again.

Matthew was a tax-collector working for Roman occupiers of Galilee to tax his own people. He gave that up to become one of Jesus’ twelve disciples and later in his life he wrote an eye-witness account. His account interweaves an understanding of the Old Testament with his first hand knowledge of the life and person of Jesus. Today’s passion play is based on Matthew’s account.

Passion Plays are all about Jesus. It is his life, death and resurrection that is celebrated at Easter. If you want to find out more about Jesus and Christianity try one of these:

1. Read the eyewitness accounts of Jesus in the Bible.

Matthew, Mark, Luke and John provide accounts based on first-hand experiences. These books document what Jesus said and did and what happened to him on the first Easter over 2,000 years ago. 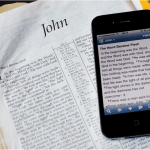 2. The free Bible app allows you to read hundreds of versions, including audio, all on your mobile device.

You can access your bookmarks, notes, and reading plans from anywhere. Download the Bible App and read more on your table, phone or Kindle. 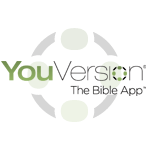 3. Listen to the accounts of Jesus in the Bible read by actors. 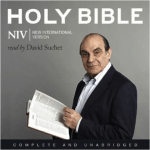 4. Join thousands of others at a course to explore Jesus and Christianity.

Alpha is a series of interactive sessions that freely explore the basics of the Christian faith. No pressure. No follow up. No charge. Learn more here. 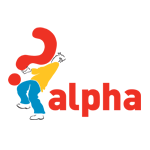 Not in academia. Engage with a philosophical perspective from Vince Vitale at Wycliffe Hall, University of Oxford. Vince shows how in the fields of philosophy and sociology, God is very much alive. If you think intellectual objections undermine belief in God, Vince suggests that you may be unaware of the arguments at the highest level.