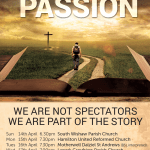 The People’s Passion is a beautiful hybrid of theatre and worship that was used effectively in Lanarkshire to bring the Gospel to life. It was performed as a service of worship in five towns throughout Holy Week. The evenings opened with one of the local clergy welcoming the congregation (and usually opening in prayer) followed by a short introduction from one of our own leads – to rehearse the congregation for their participation. The passion play then followed. It included two points where the congregation had responsive lines (Palm Sunday and the crucifixion) as well as two points of congregational singing (Palm Sunday and the entombment). The evening was closed with a benediction.

For Wishaw, Lanark and Carluke, this was the first Passion Play in the history of the town (as far as we can gather). For Motherwell it was the first since the 1950s. In each of the towns, the services were part of joint, ecumenical celebrations for Holy Week.

A Boys Brigade company from Dunblane made a trip to see the play in Motherwell. There were others who journeyed from outwith Lanarkshire to join us. Other notable guests included South Lanarkshire Council’s Provost (who wrote a letter of thanks, saying, “It was a true and compelling contribution to the Easter message”), Hamilton’s Presbytery Clerk and our major funders, GoForIt.

Our media campaign was successful, with great coverage during Holy Week in all local papers, including pictures of “Jesus” on the front page. Our director was interviewed on Radio Scotland’s “This Morning with Cathy MacDonald” on Palm Sunday. Church of Scotland then put a series of images from our Passion Plays to the broadcast and put it on their facebook page. It has had more than 4,000 views.

On social media, in the month preceding and during Holy Week, we had more than 45,000 engagements on twitter and regular activity on Facebook.

It also brought people from all different churches, and those of no particular faith, together. There was really good discussion amongst the people who were there on the night I was there.

It felt like we’d been present at Jesus’ cruxifiction.

It was very moving and made you feel as if you were there and part of the story.

I am having a difficult time at the moment, struggling and questioning my faith at times, and seeing this presentation helped me to feel stronger and touched me deeply.